Kodiak is located on the northeastern edge of Kodiak Island in the Gulf of Alaska. The Island is 250 air miles from Anchorage and 100 miles by sea to the closest road in Homer.  Alexander Baranov, a Russian fur trapper, established a settlement at Chiniak Bay, the site of present-day Kodiak in 1792. At that time, there were over 6,500 Sugpiaqs (Koniags) in the area and the Island was called "Kikhtak." It later was known as "Kadiak," the Inuit word for island. Kodiak became the first capital of Russian Alaska until Alaska became a U.S. Territory in 1867.

The "Town of Kodiak" was incorporated in 1940. During the Aleutian Campaign of World War II, the Navy and the Army built bases on the Island. Fort Abercrombie was constructed in 1939, and later became the first secret radar installation in Alaska. Development continued, and the 1960s brought growth in commercial fisheries and fish processing. The 1964 earthquake and subsequent tidal wave virtually leveled downtown Kodiak. The fishing fleet, processing plant, canneries, and 158 homes were destroyed - $30 million in damage. The infrastructure was rebuilt, and by 1968, Kodiak had become the largest fishing port in the U.S., in terms of dollar value.

Today, the Port of Kodiak is "homeport" to 770 commercial fishing vessels. Not only is Kodiak the state's largest fishing port, it is also home to the largest Alaskan fleet of trawlers, longline, crab and salmon vessels.  Kodiak vessels fish year round for cod, pollock, rockfish, halibut, black cod, crab and all five species of salmon.  Kodiak is consistently ranked as one of the nation's top fishing ports by volume and product value.   Kodiak is also a thriving business community and a transportation hub for southwest Alaska.  In 2007, Kodiak was designated as a "Coast Guard City" because of the community's close ties to the largest U.S. Coast Guard base in the country.  Over 2500 active duty and dependents are stationed in Kodiak.  The Coast Guard base is home port to two cutters and a buoy tender.  The Air Station flies 6 C-130 four engine aircraft and 6 MH-60T and 4 HH-65 helicopters on missions all over Alaska in support of Search and Rescue, enforcement of laws and treaties and providing logistics support.  Kodiak is also home to Pacific Spaceport, the first non-federal satellite launch complex in the United States. 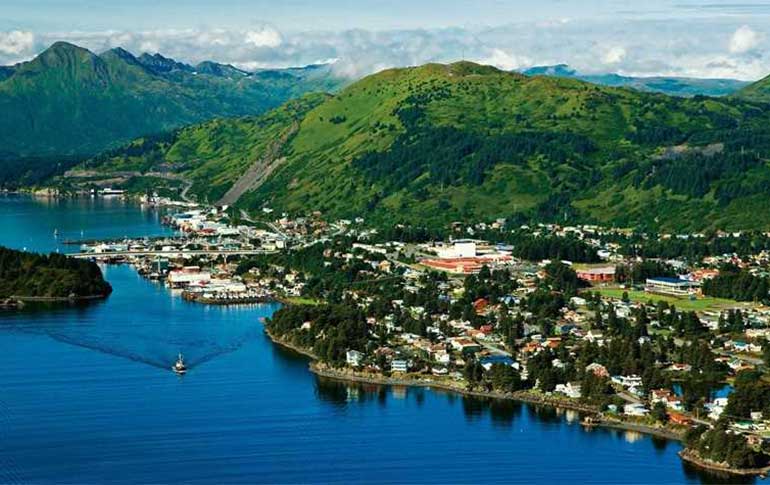